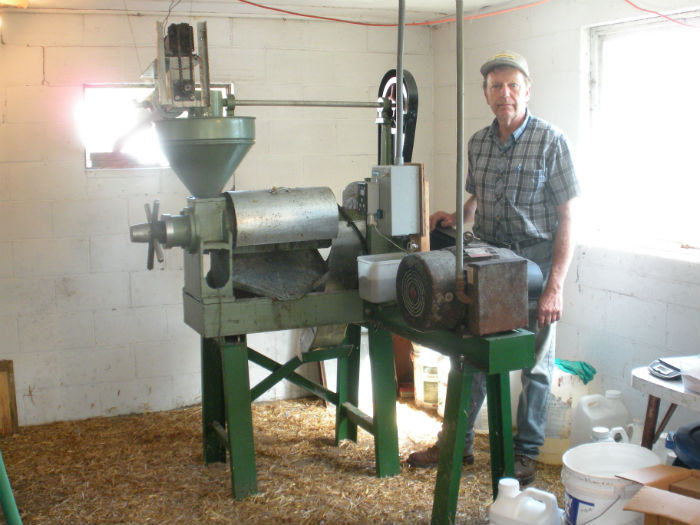 “Quality hay for discriminating animals.” That’s the motto for Deerfoot Farms, located in Leesport, PA., USA. Owner Dave Brown, a respected businessman that has a niche for growing and harvesting hay, has discovered numerous ways to save money for his business and family. But the reason Dave is being featured is because of the creative techniques he uses to provide fuel and heat for his home and vehicles. There’s more to this farm that meets the eye.

Along with his brother Wil, 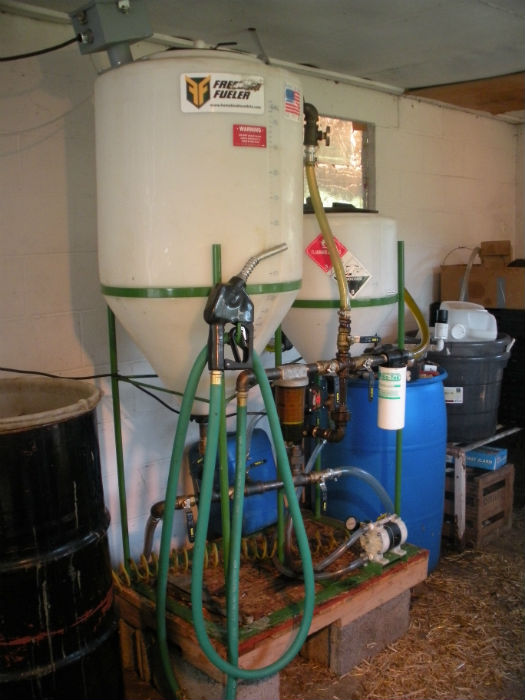 A retired engineer, Dave put together a pretty cool system that allows the two homes on his farm as well as the vehicles, to be run using alternative energy resources that literally come from his own backyard. He grows them!

Pictured below is a small silo or shall I say an awfully large grain container that is installed right next to the farms’ outdoor wood burner/boiler. According to Will, if they used firewood logs for the boiler, they would need to cut and split approximately 10 cords of firewood per year to heat both homes on the farm. Instead, they fill the grain feeder with oats, barley, wheat, and corn (and any other small wood by-products).

Sometimes they also purchase what other farms consider waste such as peach and cherry pits which can cost as low as $60 per ton (a lot less than wood pellets!). The outdoor wood burner features an automated feeding system which uses augers to move the grain from the feeder to the furnace and to spread the grain evenly within the burner itself. This process heats two homes and the hot water too!

But This Is What Really Intrigued Me. 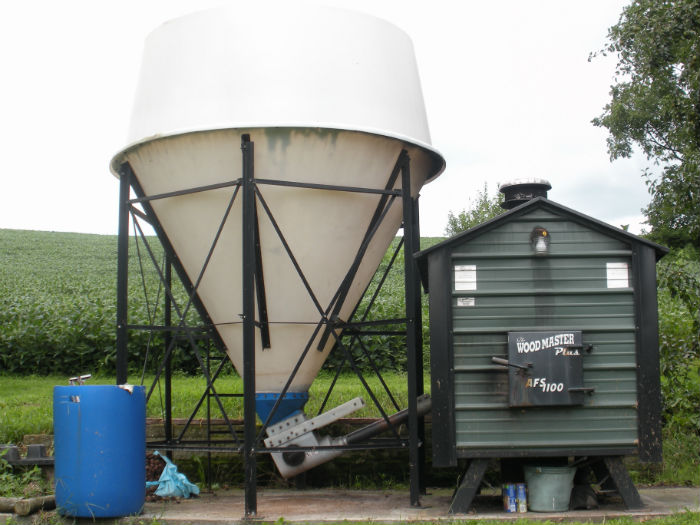 During my tour of the farm, I was shown the inside of a large silo which at the time contained Canola seed (all grown on Deerfoot Farms). Upon asking what the seed was used for, I was directed to a smaller building on the farm which at first thought was something that looked like a laboratory of some sort. Was “Dave the farmer” really “Dave the mad scientist”?! Not really, but I’ll tell you what, it does takes some “smarts” to put together a system that squeezes the oil out of Canola seed to make a biofuel that can be used to run your own farm machinery. Good thinking, Dave. Wood Burner Pro recognizes Dave Brown for choosing renewable energy methods over fossil fuels for his home and work needs. 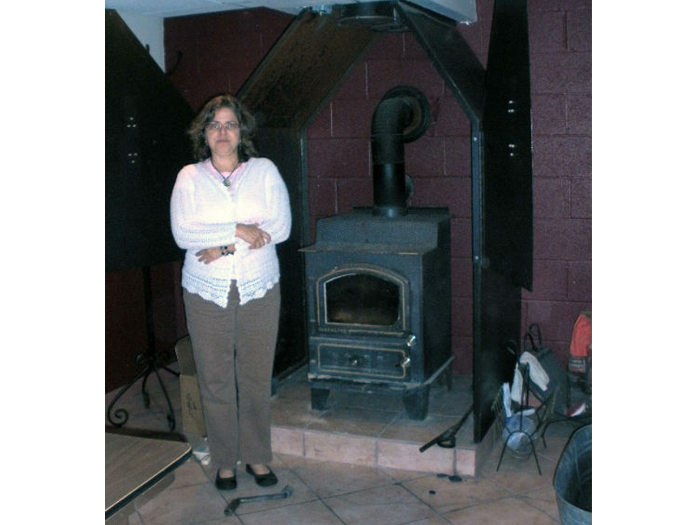 Take a look at what Cindy and Gary from Robesonia, PA have done with their woodstove. They built a custom sheet metal enclosure around the stove to capture and direct the heat to flow exactly where and when they need it. No more waiting for the entire downstairs to fill up with heat to warm up the rest of their home. They simply fire up the stove, turn on the blowers, close the cabinet doors and the heat travels straight to the rooms upstairs.

Gary designed the frame with “moving” the heat in mind as opposed to letting the heat rise by itself, which we know could take hours without the proper air flow. He installed 2 fans inside the top of the frame which force the heat through ductwork that connects to the floors in multiple rooms throughout their home.

The sheet metal frame can be built with the help of any local fabrication shop and all other materials can be purchased at your local hardware store. Options include having the front door panels open for directly heating their downstairs or closing the panels with the blowers turned on for heating rooms upstairs. They also use the fans in the Summer to circulate cool air! 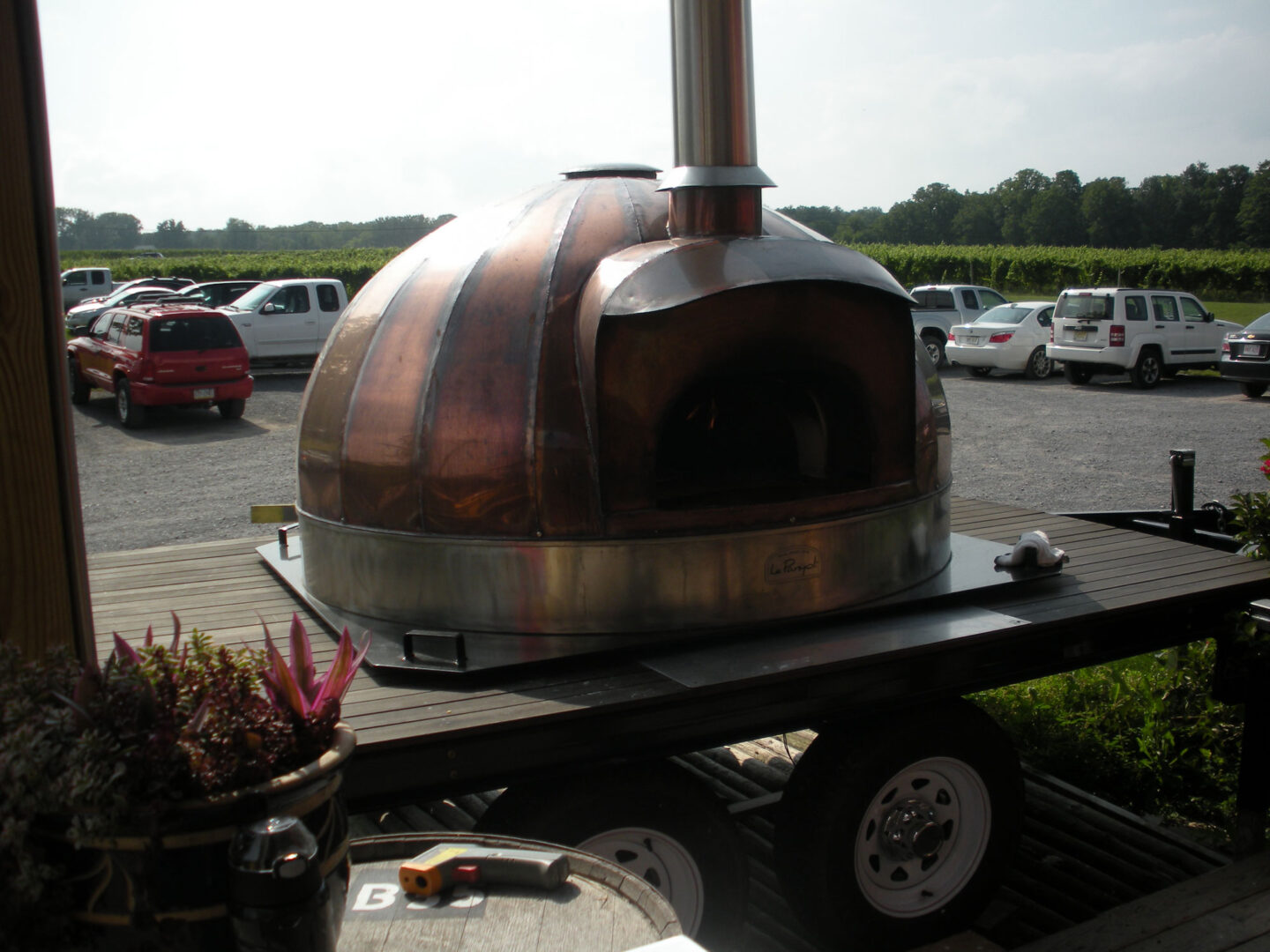 There’s nothing like the taste of pizza that was baked using firewood. If you ever get the chance to visit the Finger Lakes in New York State, be sure to stop by The Copper Oven at Cayuga Ridge Estate Winery to try some of their wood-fired pizza (their desserts are baked in the same oven too!). Right smack dab in the middle of wine country, nestled alongside Cayuga Lake is the home of this family run winery.

We decided to feature them because of the very special way they prepare most of their entire menu. They use firewood to heat and add that unique flavor to their freshly-prepared cuisine. Congrats to The Copper Oven for using a natural, renewable resource such as wood to cook their foods! 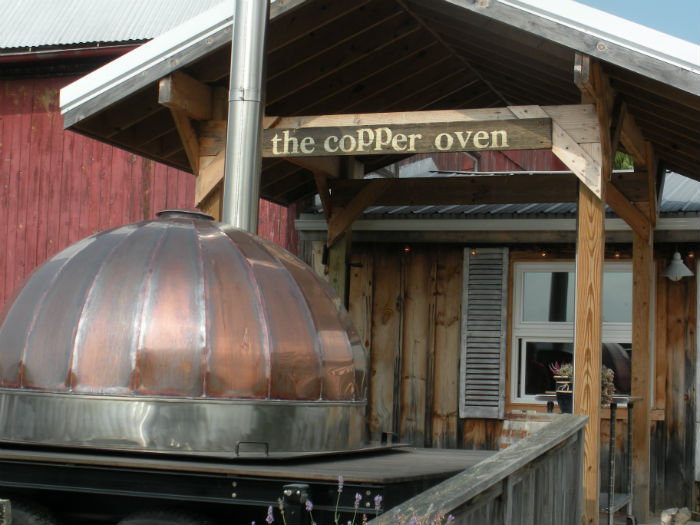 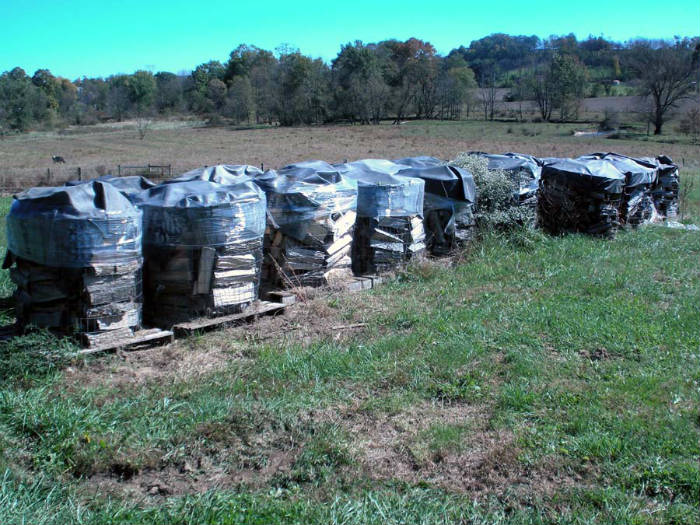 Harold and his very unique way 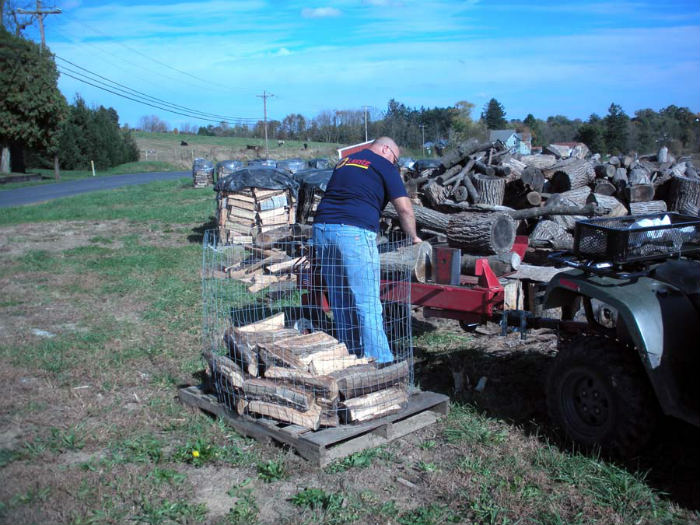 Harold from Mohrsville, PA is storing his wood in a very unique way. Take a look at the pics below and you will have to agree that his wood storage is very distinct in that he stacks the logs on wooden pallets, held together with wire fencing, and covers them with a rubber material. The thin rubber material is water and moisture repellent so it protects his fuel from all the elements and the fencing that holds the logs together lets the air flow through for proper seasoning. The wooden pallets keep the wood off the ground AND allow for easy pickup and moving with his small skid loader.

Yea, he’s got one of those Bobcat machines and now it all makes sense. Since Harold has a few woodstoves in various locations in his home, garage and tool shed, his method of stacking and moving the wood is very practical. He simply uses his Bobcat to move a pallet full of firewood to whatever location is in need of fuel for burning! Kudos to Harold for coming up with this unique idea customized especially for his needs.